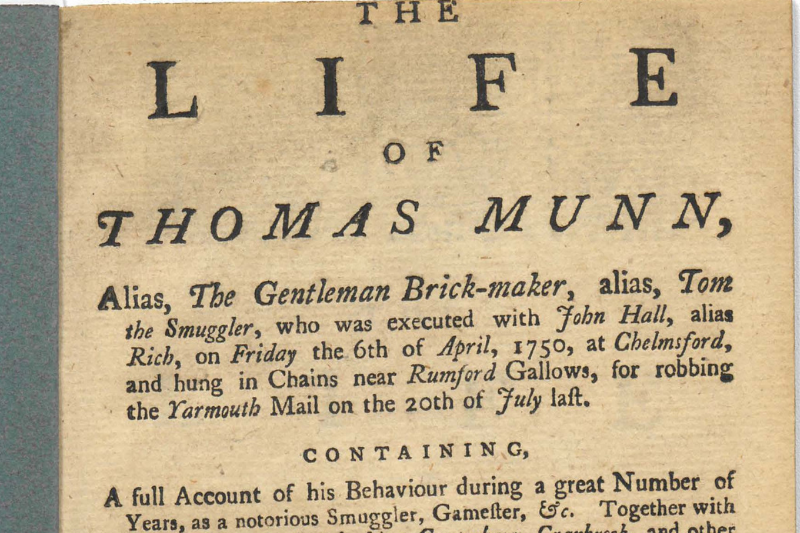 A fascinating look at a recent acquisition from 270 years ago telling fascinating tales of failed gay seduction, smuggling, robbery, and a 19-year-old lad courting a rich 70-year-old widow, causing mayhem and gallivanting across England and France in order to escape his work in brick making.

Thanks to the generosity of the Friends of the National Libraries, Horsham Museum has just acquired an incredibly rare 270-year-old booklet. This rare autobiographical work was written just before Thomas Munn was hanged and “hung in chains at Rumford”. It was sold throughout the land and printed on cheap paper that was also used as toilet paper. Interestingly this rare publication about an English man came to light in America

The printed cover of the 24 paged booklet, published in 1750, tries to grab potential readers’ attention by listing the places Thomas Munn, “Gentleman Brick Maker” as he and others styled him as he owned a horse, carried out smuggling, robbery and “pranks”. What raises this publication, only held in 4 libraries around the world, above the usual deathbed confessions is the degree to which Thomas was self-aware and reflective on his life.

The reader, who paid pennies from the “hawkers who sold the news”, would have come across a remarkable account of an incident in a Southampton Inn as they turned the thin paper pages. The son of the innkeeper, who practiced as a barber, joined Munn in his room. Later in the evening, on the pretext of keeping warm, the young man slipped into Munn’s bed admitting that, “I love to lie with a naked man”. Munn had taken his shirt off “for fear of any Distemper, and to save my linen, for I heard it was safer, and I was terribly afraid of the Small-Pox or the Itch”. As Munn goes on to account:

“He had not been long in Bed but began to act a Part so Contradictory to Nature that I started up in Bed, wanted Words to express my Confusion, Surprise and Passion, at his Propositions”.

Munn threatened him (with a penknife he did not have) and the “chap” left and the following day made “many Excuses”.  As Munn recounts:

‘It was what I never met with before, nor since, but had Philosophy enough in me, to think it a pity to expose a young Man, tho’ he pointed at a very heinous Sin; and certainly we that commit Crimes beyond what is common, ought to be pitied, for no Man is certain if he comes under the same Temptation, that he shall be able to withstand it:” Going on to write “ I don’t say this to take the Part of such sort of Men as my Peruke-Merchant’.

Horsham Museum now has three historic accounts of homosexuality in its collections. One, a rare letter by a solicitor acting as an intermediary between two parties asks for £40 as hush money, another where a 19-year-old man was hanged for homosexual acts in 1833 and his dead hand was passed over the sick women. Thomas Munn’s account is, by contrast, a remarkably modern approach as it shows that he had a more enlightened approach to sexual identity. As Munn all but came out and said, he was tempted to take up the young man’s bedtime offer. 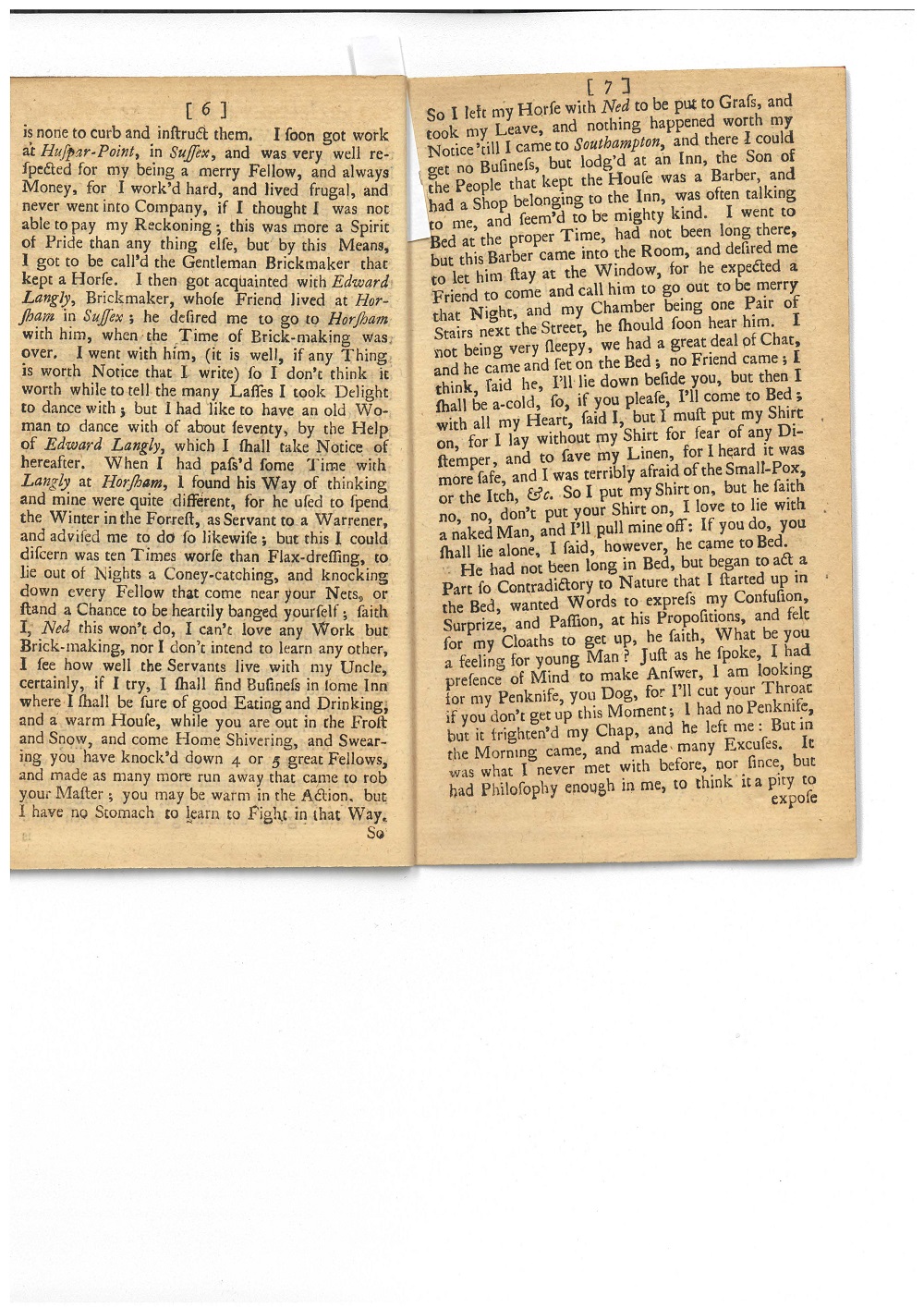 It was the account of an incident in Horsham that initially caught Horsham Museum’s attention. Thomas was born in Kent in 1705 to a brick making family, this was a newly flourishing industry as houses were being upgraded from wood to brick. Munn had “trudged” to Horsham to meet up with fellow brick maker Ned Langley. Having left behind an unhappy “mistress” Ned had “got a Wife” for him. This potential wife was a 70-year-old widow worth £1300 to £1400. Munn describes in the woman is his account as follows, “I instantly observed the poor old Soul could not bite me, because she had ne’er a Tooth in her Head, which made her kiss might soft”.  However, a local solicitor also wanted to marry her and as Munn outlines, the solicitor visited the widow on the pretext of borrowing £20. She then “daddled up Staires with him, and seem’d to be long enough there to have tried a Cause”.  As a result of this visit Munn gave up his suit and the Solicitor, who loved money more than the widow, married her according to the booklet, “it was a very unhappy Match.”

Though Thomas was a brick maker and Horsham had some 18th century brick making sites, this is the earliest known mention of brick maker in the town. Unfortunately, we do not know where Ned Langley worked. The account goes into the practices of the time, such as making bricks during the summer and then finding other employment in the winter months. Ned worked in St Leonard’s forest protecting the rabbit warrens from poachers. Thomas didn’t like the work, finding it too cold and too dangerous lying in the forest at night “coney-catching”, so he learnt to play the flute and to dance and went into Sussex to become a dancing master. He “got a set of Young Fellows as undiscerning as myself… to go with me Morris-dancing, as it is called in that County”. This is one of the earliest references to the pastime. However, some three years later after leaving Sussex Thomas was back in the area, making bricks at Henfield, a village some 7 miles from Horsham. According to brick historian Molly Beswick, there was a brick field operating in Henfield by 1735 yet this account pre-dates that by 7 years. For Tom it would be the last place he made bricks as the life of crime, music and pranks was more appealing.

This rare publication, found in America by book dealer Justin Croft, is a remarkable and multi-faceted publication that the Museum felt it was essential to acquire. The Friends of the National Libraries (FNL) is the only UK charity that focusses solely on supporting acquisitions by regional, specialist and national archives, libraries and collecting institutions enabling them to buy rare books, manuscripts, archives and fine bindings (www.fnl.org.uk). Fortunately for the Museum,  FNL also felt this booklet to be important and that Horsham Museum was the right home for it, so they awarded a 100% grant to make purchase. Without their generosity, and the sharp eye of Justin who saw it on an American auction site, the people of Horsham District and further afield would not have the opportunity to explore this remarkable story.

As in any good Valentine’s story the acquisition came about by being in the right place at the right time, from temptation - seeing something online that caught the eye (just as in modern world of dating), grasping an opportunity, and of nervously awaiting a positive response for the first time grant from FNL. Fortunately, for Horsham Museum this romantic adventure paid off, and as a result the museum now has an item that “turns heads” and raises envious exclamations of how lucky they are to have found each other. The Museum now has brilliant new addition to its collections, a fascinating story that links the town’s early brick making with “gold digging” seduction, the autobiographical account of a robber, smuggler and prankster, not to mention a rare account of a failed gay seduction, all wrapped up in a publication that almost certainly was sold in the Horsham fairs using the marketing ploy of listing all of the places Thomas Munn visited. What more could you ask for in a 270 year old booklet, that had travelled to America and back again?