All in a day's work: Revealing the original flagstone flooring 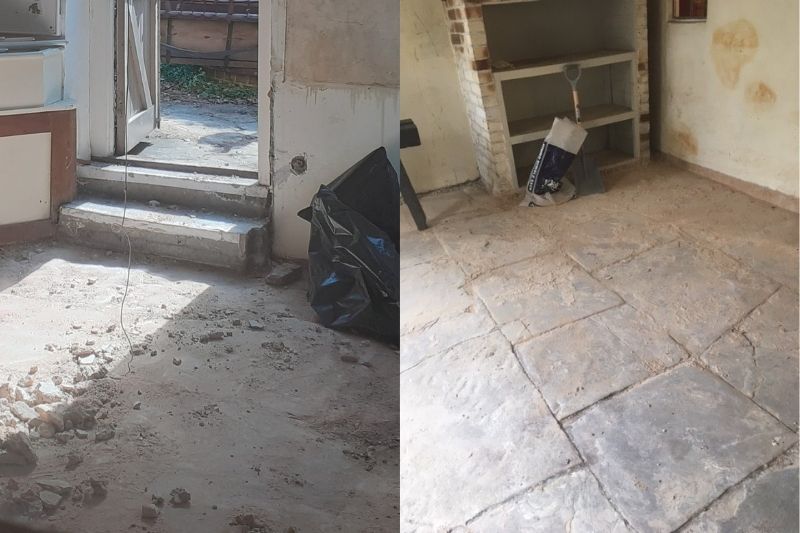 After laying hidden for at least 50 years, we've revealed the original flagstone flooring at the back of the museum.

As our refurbishment of the Museum continues, we were faced with a choice in the Wheelwrights area when it came to the flooring. We could either repair the cement floor, cover it with vinyl, or take an educated gamble at what we thought lay underneath...

Under one patch of crumbling cement was what looked like a flag stone, but there was no way to tell what was under the rest of the floor. Flagstone throughout would make sense, we thought, as the rooms around the Wheelwrights all had flag stone flooring.

So our decision was made. A day's work and over 20 bags of cement later, a full flag stone floor was (thankfully!) revealed, after laying hidden for at least 50 years.

This beautiful floor is the “bedrock” on which the museum will build a new display on the Horsham District in the 19th & 20th century.

The history of the Wheelwrights area

The area itself was originally the service range back when the museum was a medieval house. It was built at the side so it could be pulled away if it ever caught light. The timber was replaced with brick in the 18th century.

In recent years it's been the Wheelwrights, so called because it looks like a working forge or wheelwright menders.

It is a fantastic space and a great opportunity to expose the building's history.