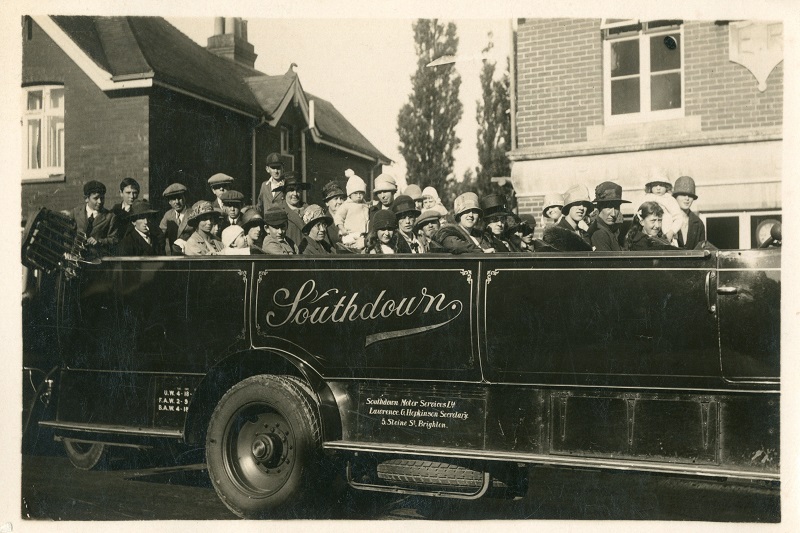 Many of our readers may have plans for a day trip, outing or break away from home this half-term. They will be in good company as Horshamites have been going on days out for centuries.

These days we expect to be able to take paid holiday from work, but this is fairly recent phenomenon. The Bank Holiday Act of 1871 established 4 days of paid leave a year in England and Wales, 3 in Scotland. It wasn’t until the passing of the Holiday Pay Act in 1938 that workers who were members of trade boards received the right to a week of paid holiday a year. This limited holiday time may explain why most accounts of days out by Horsham residents mention children, not adults.

One of the first such accounts occurs in 1851, 3 years after the first train arrived at Horsham. The brewer Henry Michell and other town worthies organised an excursion for children to see The Great Exhibition. As his diary recounts, on 24 September 1851:

…we went with all the school children in the parish to the number of 380…all those of 7 years of age and upwards in the Colleges, British and parish schools and those in the Union house and certainly these poor children formed one of the most interesting groups of the whole party.

The party left Horsham at 6am and returned just before 10 pm, a long day for the 32 accompanying adults! The group obtained a special rate for the train, 2/6 for every child over 10 and 1/6 for under-10s. The cost of the day came to £63 16s 2d which could not be met by the 1-shilling charge to the pupils. However, due to public interest in the Great Exhibition, funds of £42 9s 6d were raised by public subscriptions and Henry Michell paid the remaining £3 13s 8d.

The importance of the railway to allow for the creation of day excursions or holidays cannot be overestimated. In 1868 the Albery Journal promoted its pleasure trips:

The new traffic-manager of the Brighton Railway Company, Mr KNIGHT, has given the inhabitants of Horsham…the opportunity of making some very cheap excursion trips. In addition to the usual cheap trains to Brighton and the Crystal Palace, there have been “cheap pleasure trips” round the Isle of Wight every Wednesday the third class return fare from Horsham being only five shillings! And on August 21st, an excursion was commenced extending over three or four days across the Channel to Dieppe and back, for the sum of ten shillings. 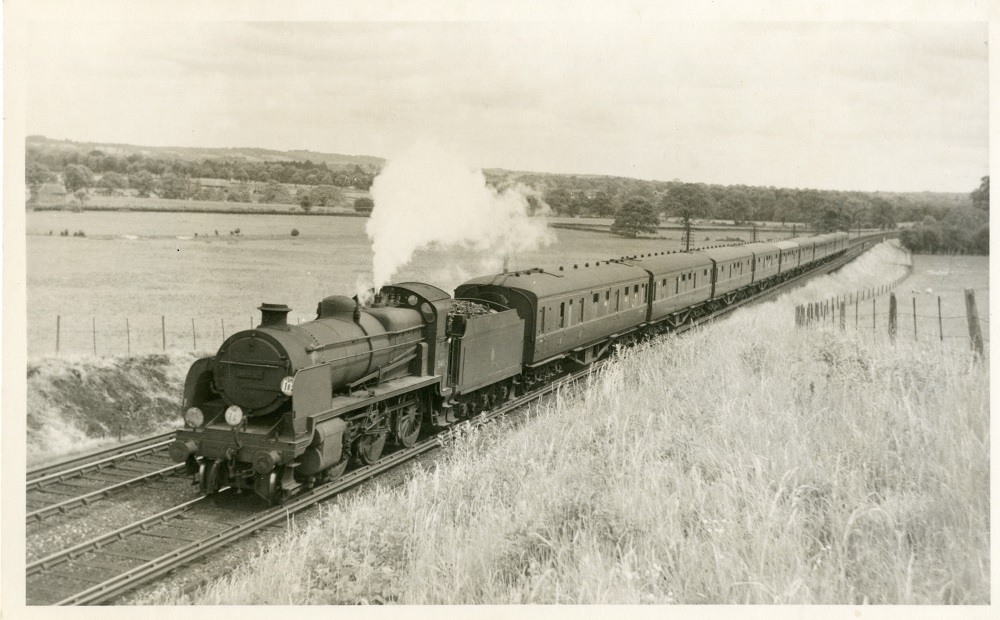 In 1884, to celebrate the festival of Harvest Home, the workmen from Warnham Court Estate visited the Public Health Exhibition in London "through the kindness of their employer Mr Lucas". Fifty-seven men left Horsham station at 9.26am, arriving at London Bridge shortly before 11:

Here there were three omnibuses in waiting to convey the men to their destination in South Kensington. A most interesting route had been arranged for the party by Mr. Alfred Lucas, who, by his thoughtful kindness, did so much to render the excursion a success. After a visit to St Paul's Cathedral and a ride through some of the crowded areas of the city, the men were taken along the embankment to Westminster Abbey...it is hardly necessary to say that all were deeply impressed and interested by all that they saw in the noble Church...After having seen all that could be seen in the time, the men took to the omnibus again, and reached the exhibition just before 1 o'clock, in time for the dinner which had been laid out for them by Bertram and Roberts in one of the public rooms... Much of the afternoon, and the whole of the evening, were spent in listening to the fine bands of the royal marines and the grenadier guards; and it would be difficult to say which was appreciated more, the glorious music of the bands or the sight of the brilliantly-illuminated gardens. Both together formed a feast for eye and ear, which will not easily be forgotten. A visit was also made to the Albert Hall, and some time was spent here in listening to the magnificent organ. Shortly before nine a start was made for Victoria, to catch the 10.05 train for Horsham. 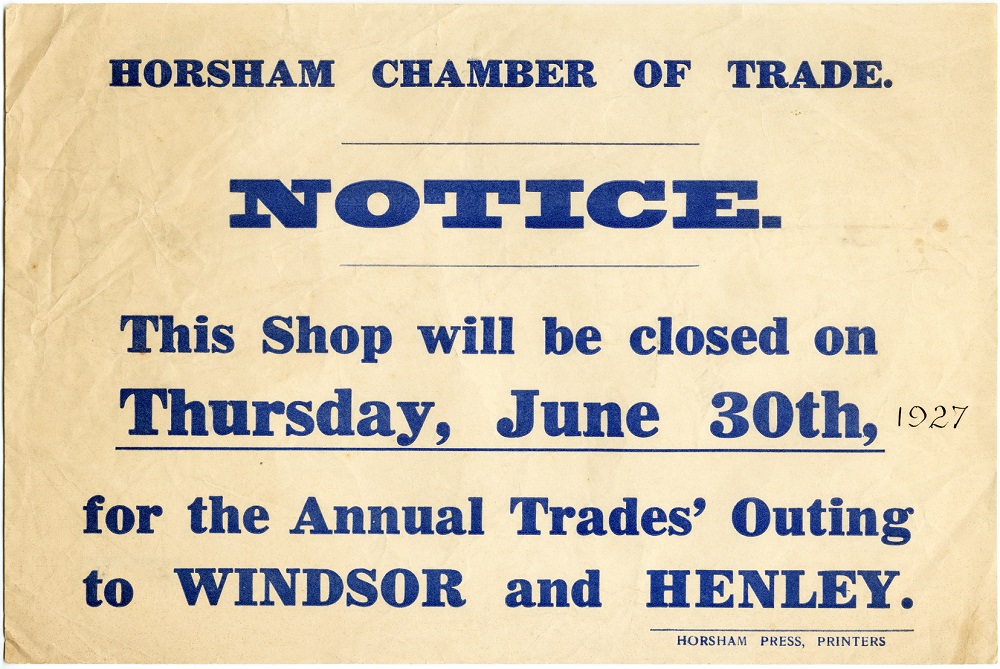 The popularity of such days out continued for decades to come becoming a normal event and as such hardly recorded. Some were organised by employers, for example in 1928 the Annual Town Outing was arranged by the Horsham Chamber of Trade for Thursday 12th July. A train carried 257 excursionists from Horsham to Lyme Regis then Seaton, Sidmouth and Exmouth. The group left at 7.30am and returned just after midnight. As the paper noted, “it was the most ambitious excursion attempted by the Chamber of Trade, costing 10/- for the 176 mile trip to Exmouth. 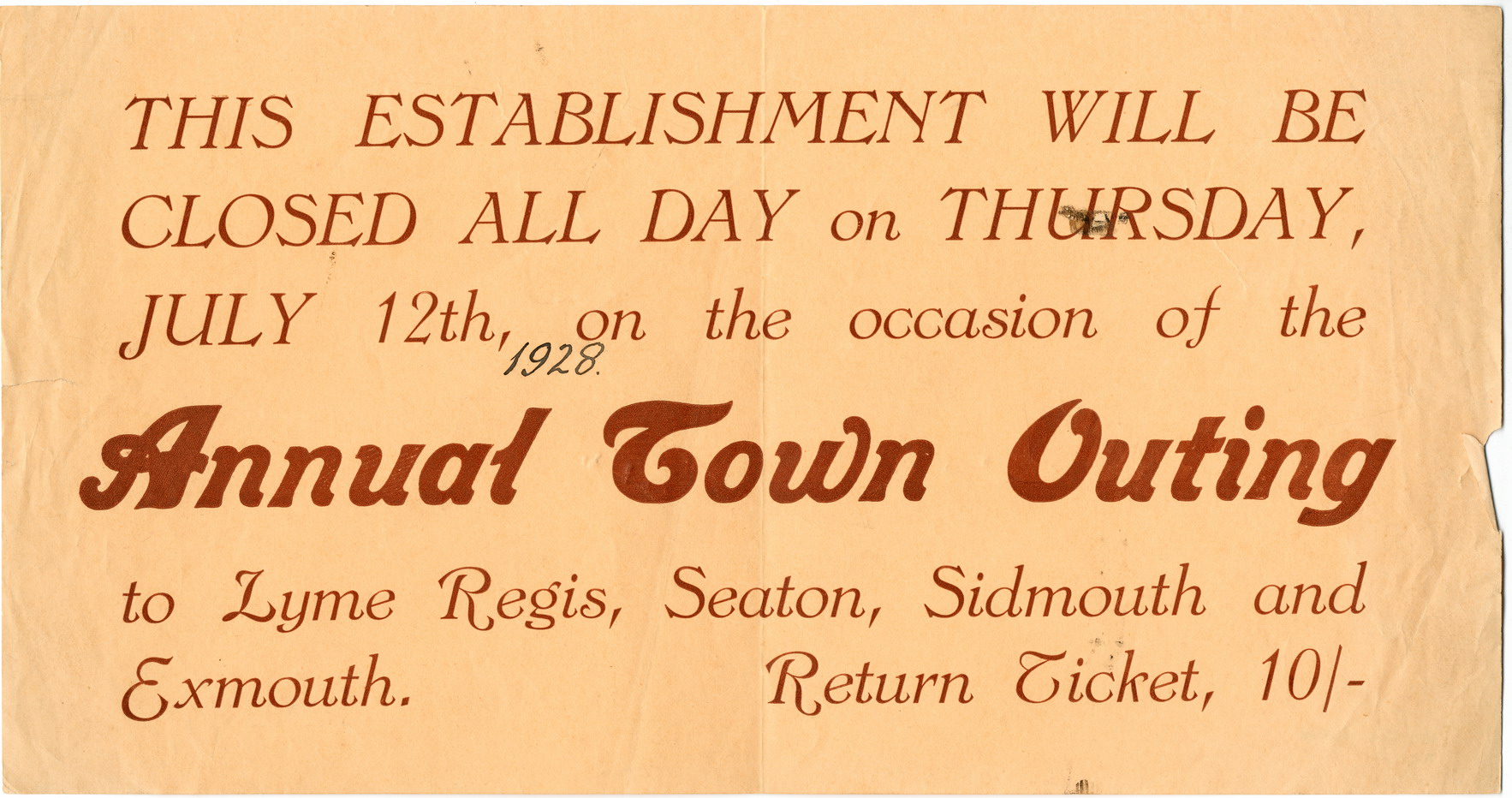 In an issue of the County Times in 1931, it was reported that:

the annual outing for children by the Roffey Social and Ex-Services Men’s Club, took place last Friday, when a party numbering about 350 children and their mothers spent a happy day at Bognor. …The party had lunch and tea at Bognor Pavilion and when the children assembled in the train to commence homeward journey they were presented with oranges and silk flags. 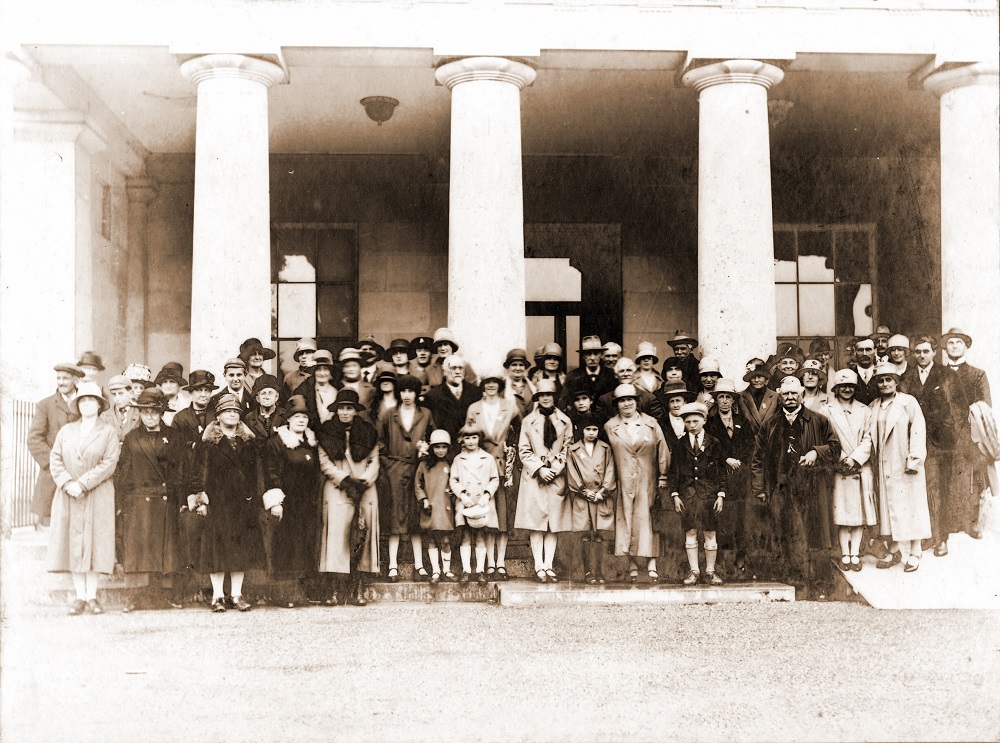 The paper also published the prize-winning entries in a competition asking local children what they did during their summer holiday. The winning entries reveal that summer holiday lasted 5 weeks in 1923, and that holiday outings included a visit to the woods, a trip to Brighton for the day, outings to Chichester and Bognor, and an excursion to Hayling Island to stay with family. One child, Alf Gratwicke, wrote:

“One day I spent helping a gentleman hay-making and he gave me two and sixpence. Another day I followed the self-binder round the field and pulled out the docks with a hundred in a bundle. Altogether I pulled 1156 at two pence a bundle hundred. Two days I spent standing up sheaves and I went for a few rides with the butcher and helped deliver meat….”

Whilst Fred Rice would write: 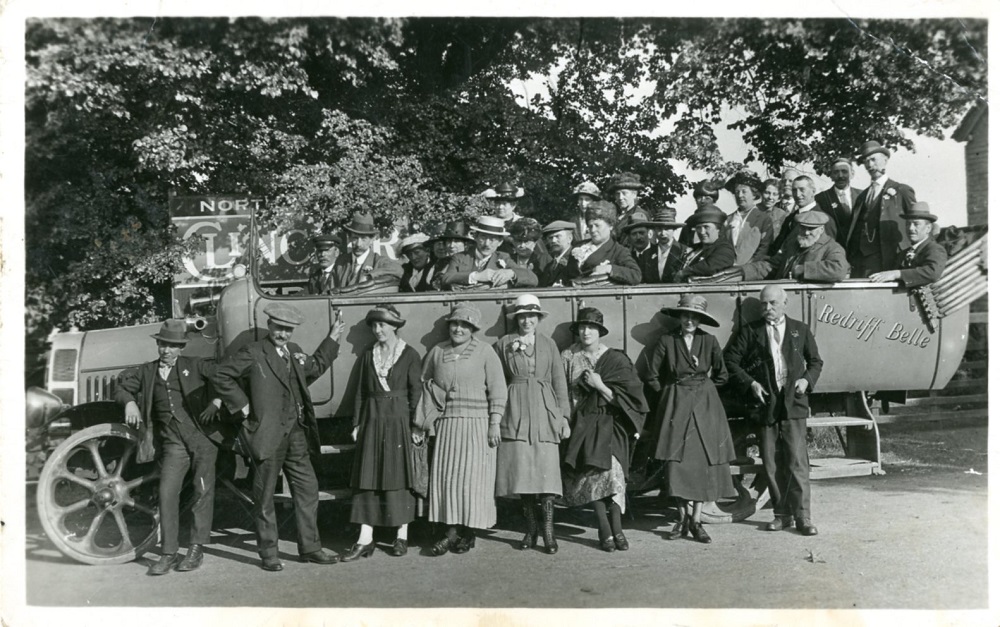