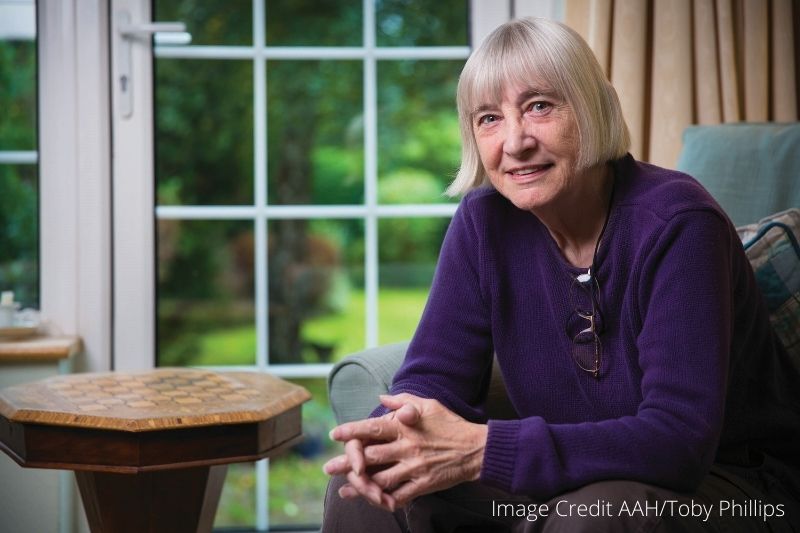 “If you don’t know where we’ve come from, how can we see where we’re going?”

There are very few people who write seminal publications that transform our understanding of a town, yet on Saturday with the passing of Dr Annabelle Hughes, Horsham and Sussex have lost one such person.

As with many town histories, it is as a newcomer that Annabelle saw what was hidden in plain sight and with an innate curiosity explored the buildings with her mentor Sylvia Bright. Jointly they delved into basements and went “ferreting” away in roof spaces, exploring and capturing obscure details and building up a database of raw building history.

That though is galloping away with her story. Annabelle who due to sickness had become a single mother with four children under 17, decided to complete her Open University honours degree followed by a MA at Sussex University. Her MA thesis on Horsham Church Warden accounts from 1610-1640 hasn’t been published, but it fed into her further research as she learnt to read old manuscripts. Her interest in old buildings was ignited by the campaign led by the Horsham Society to save Prewetts Mill from demolition. Since then she has been a stalwart of the Society leading many campaigns and conversations with Horsham District Council over how the town should care for its past.

In the 1950s the study of local history was revolutionised through the work carried out at Leicester University by W. G. Hoskins. At the same time there was a growing awareness of historic buildings which became enshrined in law with the Town and Country Planning Act and the Listed Buildings list. Some three years later the Weald and Downland Museum opened, rescuing buildings from across the South East.  Allied to this was a growing corpus of work on medieval carpentry. Annabelle was at the forefront of this work when she decided to stay at Sussex to undertake her PhD on timber framed buildings. It was, according to Annabelle, disparaged by her tutors, but the academic interest in such work became apparent when in 1985 Brunskill published his Timber Building in Britain. From then on numerous academic publications were produced emphasising the approach Annabelle had undertaken. One reason she became so important in the mentoring of others in the field, including a number of Horsham District Council Listed building officers, is that she was hands on not just theoretical. She physically explored all those bat dropping-infested crevices and cobweb-covered corners. Listening to her was like taking a masterclass in building techniques.

Research in roof spaces rarely gets you noticed, not that Annabelle craved publicity, but as a result of friendship and mutual respect with Anthony Windrum (who had published a popular history on Horsham), together they produced the first photographic book about the town. It was a publishing triumph that has led to a constant stream of such publications, though none by Annabelle who was straightjacketed by the requirement to concentrate on pictures more than the story. However, in 1982 Bygone Horsham was published and 4 years later, just in time to awaken Horsham to its built past, Horsham Houses.

The book was based on the raw research carried out for her PhD, which was completed in 1988, and told the people of Horsham both the history of the buildings and the people who lived in them. It was the benchmark for Horsham, and for many other towns and villages who have replicated her approach. The recent history of Causeway House is built on its chapter in her book.

Through the Horsham Society Annabelle then became involved with the town centre re-development, working closely with Martin Pearson the former Chief Executive. The redevelopment was once in a lifetime transformation of the town and they knew they had to get it right; Martin, not wanting to lose any more historic houses, and Annabelle keen to make sure the Council were aware of what they could be doing. The extensive work saw many old buildings being adapted, but not one listed building was pulled down or destroyed. Annabelle’s awareness of historic changes led her and journalist John Buchanan to undertake interviews with the key players. Horsham: A Town Wakes Up was published by the Horsham Society after John’s death.

Annabelle then started to focus on probate lists, making these obscure documents available to all to read. Scholarly, they didn’t pander to the curious, but did feed the mind of those who were seriously interested, providing raw data to interpret and build on. She had by now become interested in archival research and it was then that our paths crossed. She mined the town archives held at the museum, though her archival home was West Sussex Record Office which she would visit weekly, giving support and encouragement offering advice freely. To make ends meet Annabelle researched individual buildings for their owners, discovering that she could make a living out of this and, more importantly contribute to a wider understanding of local heritage.

Annabelle became a frequent contributor to the Horsham Heritage journal, and to the Horsham Society Newsletter, often announcing her discoveries, writing contributory articles or as joint author. She became a prolific authority but unlike many, it was not a matter of regurgitating the same old material, but always writing new research. Such was her enthusiasm that virtually weekly she would stick her head around the museum office door and talk about her most recent find, whether in a document or in a building.

Over the 30 years since she first published Horsham houses Annabelle made many discoveries in Horsham. So, I asked her to write a new Horsham Houses book, calling it Horsham Houses Revisited. It was published in 2016 alongside an accompanying exhibition. Annabelle wasn’t so interested in the look of the book, it was her words and photographs, irrespective of the quality, that told the story that was important. This was her academic training coming out. However, we wanted the book to engage with a new audience and today’s audience want lots of pictures and colour illustrations. Fortunately for us Annabelle did not mind and the book published by the Museum Society is not a rehash of the original Horsham Houses, but a new work that synthesises all her thinking about the town she loved.

At the time we didn’t know it would be her last major work on Horsham, but in many respects it is an apt publication, her “love letter” to the town that was her home, in a county that she adored.

Last year Horsham District Council mounted a Year of Culture, with heritage being a key strand. Throughout the year Annabelle would visit the museum, look at the recent exhibitions, and pop in to comment on something.  She was always delighted when owners, on finding out new things about their house, incorporated her findings into their work. It was not boasting, for she never boasted, but professional pride, knowing that her research had made a difference. Her impact is considerable, from discoveries made in humble farm buildings and barns, to Amberley Castle, from Shelley to Sussex clergy, domestic houses to pubs, from townscapes to landscapes. Her awareness and ability to make people pay attention has been considerable.

Dr Annabelle Hughes was a force to be reckoned with.  Generous in nature and particular with research, she was a seminal figure in Horsham’s heritage and will be greatly missed.  As Cllr Jonathan Chowen, Deputy Leader and Cabinet Member for Leisure & Culture of Horsham District Council  said on hearing of her sad passing, “A great loss to Horsham of an immensely respected expert on Horsham's historic buildings.”