Electrification of the Railway (part 2 of 2) 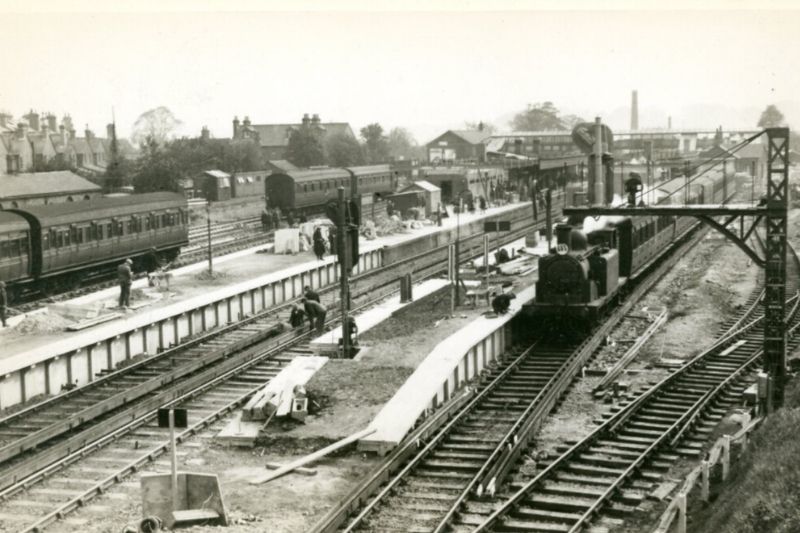 In the second part of our look into Horsham's railways we look at electrification. Today we take electric trains for granted. In fact it is a bit of a shock to find, when traveling north, that the trains are still diesel as the line to Horsham has been electric for over 80 years. It is equally remarkable that such a large investment was made in electrifying the railway in the years following the Great Depression.

Electrification went hand in hand with the growing housing market, and the expansion of the entire electric grid, as electricity began to power industry and not be used simply for lighting. In effect the electrification of the railways provided the core infrastructure for commuters in a distinct contrast to today’s ever expanding road network.  As accounts of the day show, electrification wasn’t straightforward, and did take some time to reach fruition.

The whole question of electrification was not as simple as an outsider would imagine. For a start, what method do you use; the third line, or overhead cables? Overhead cables were safer for maintenance workers who might stumble on the track, and reduced the risk of conductor rail icing up and breaking the contact. However, the third rail was a lot cheaper and a lot of the South Eastern rail network had been built cheaply and as such many tunnels and road bridges didn’t have the headroom to take the overhead wiring. “The third-rail system therefore had the advantage that it could be applied throughout the Southern Railway and, since it was cheaper and simpler to fit” therefore, it was adopted. 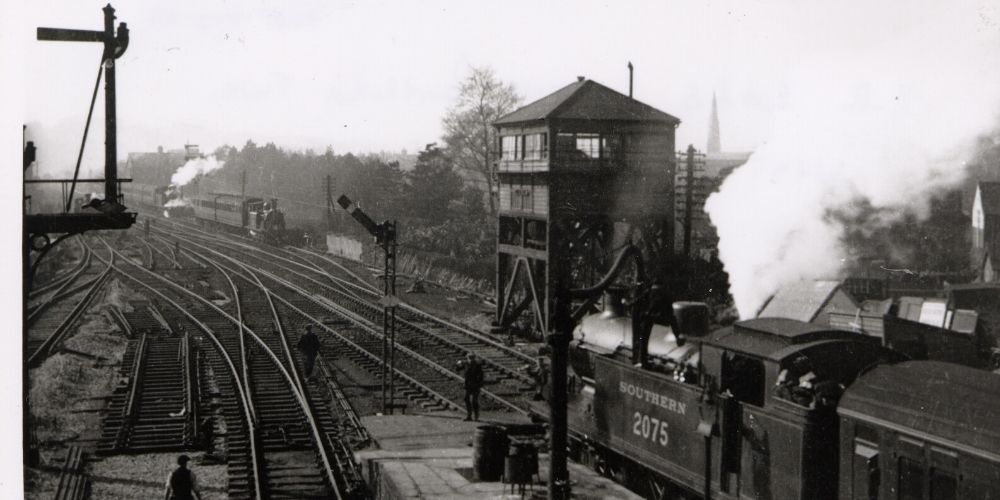 Why the change to electric?

One of the first lines to be electrified was Waterloo to Guilford and Dorking, which was completed in 1925. There was then a 12 year hiatus before the line was electrified to Horsham and beyond.

But why change to electrically powered railways? After all this was not an era of green thinking.

Electrification allowed for much faster acceleration and breaking, which meant that capacity on the railway could be greatly increased and trains could call at more stops within the same timetable

In addition every line that was electrified saw passenger numbers increase. Electrification generated jobs, so much so that, in 1931, the Government thought of introducing it nationally. Unfortunately the cost of £261m was considered too expensive even though it was thought to generate a 7% return. 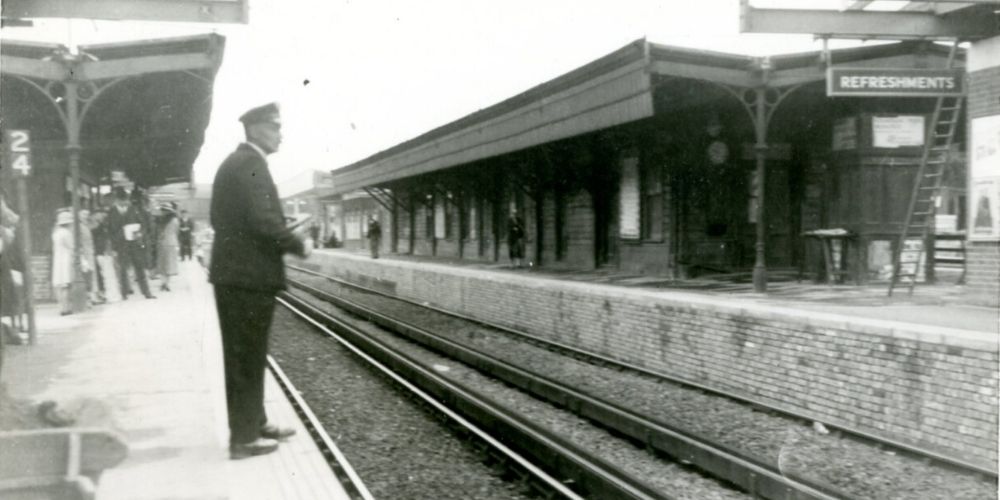 The announcement of electrification

It is not surprising then that the Horsham looked forward to the announcement of electrification, and when it came it was covered in full in the local press. However, whilst the electrification of the track was essential, what grabbed local imaginations was the rebuilding of the railway station. In December 1937 the County Times ran an article under the heading “£100,000 Railway Station for Horsham”, which went in to some interesting detail:

The building of Horsham’s new railway station which will be one of the most important events in the history of the town during the New Year is to cost about £100,000. It is hoped to have it erected by next December, four months after the completion of the electrification of the lines from London to Portsmouth, via Horsham. Involving 76 route miles, the electrification scheme is costing the company nearly £3,000,000 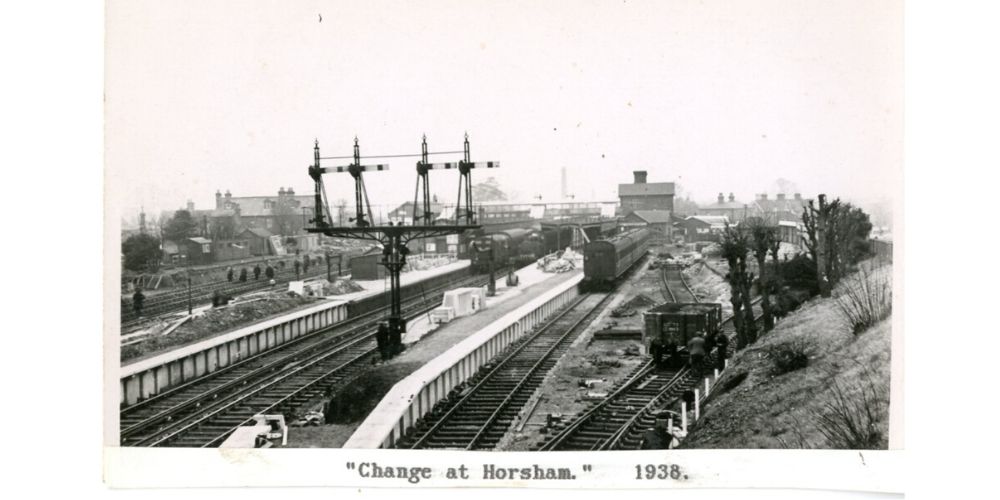 The newspaper went on to describe, in glowing terms, that:

Everything will be on the most modern lines, pleasing to everyone…the front of the station will face the center of the town instead of the junction of North-Street and Hurst road as it does at present…there will be a commodious hall and larger booking office, with the approach to the platforms behind, and these platforms will be like a one sided then two long, broad islands. The platforms between the lines will be approached by a bridge with stairways, instead of the present subway, and there will also be an entrance, as formerly from Station Road. On each platform, waiting rooms, restaurants and convenience will be provided.

When, in May 1938, the first electric train arrived in Horsham the local paper covered it in great detail, and with much excitement. The train arrived at Horsham at 10.17am, it then:

was run on to all the sidings on the east side of the station, and then the up line to Three Bridges was tested. A second run was made to Horsham and this time the train ran on to the other down line platform….After a short halt at Amberley the train returned to Horsham and then went on to Warnham up line. At Warnham it returned to Horsham, then to Amberley again, returning to Warnham, back to Horsham and then to Three Bridges. The train was watched by many people in houses cottages and fields, as it passed, sometimes at 50mpoh or 60mph…During the week residents along the newly electrified line have seen several electric trains running between Three Bridges and Amberley and Warnham and Amberley…All this has been brought to Horsham district by 66 cable trains which have arrived at Horsham Dept., bringing nearly 500 drums of cable. In the new signal box alone there is about 36 miles of wire connecting the various instruments and controls.

Within a year railway traffic increased by 13%, and commuters today take it for granted. Until there is a fault on the line that is!