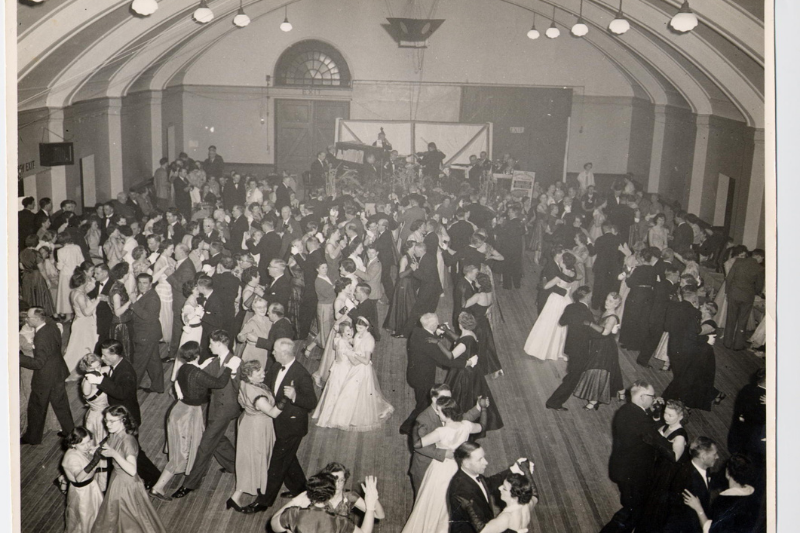 With Strictly Come Dancing back on our screens, we take look at some of the history of dancing in Horsham

Strictly is back on television and in the spirit of the programme, which is about so much more than simply dancing, we thought we would look at some of the history of dancing in Horsham.

Social dancing by its very nature is ephemeral, it leaves very little trace. Before the advent of TV and film, dancing was held in people’s memories more than in physical objects. So, whilst we know dancing took place in the district, there is very little mention of it until we get to the 18th century. We have evidence, in part due to contemporary records of a fatal accident, that dancing round a maypole took place in 1584 in the Carfax Horsham. Tragically the maypole fell and killed a young girl.  The first English dance book comprising 104 dances was published in 1651, with 104 dances, although European dances had circulated through the courts for centuries. The book went through numerous editions over the next 70 years. It was published two years after Cromwell took power and banned public dancing, which shows that even the law couldn’t stop people gathering privately to dance.

Early mentions of dancing in Horsham also occur in letters and diaries that have survived. The first that we know of is in a letter written to the owner of Hills Place in 1749. The owner spent part of her time in her Yorkshire home but received regular updates about life in Horsham. The amusingly gossipy letter mentions dancing as an important skill to have and develop:

“I Had the pleasure of seeing Captain Draper’s Bride on Sunday at Church…She is a very smart pretty girl and seemed to become her new clothes very well….They say she is learning to dance, and the Captain intends to try her Genius for Music, as soon as they can get a proper Master…she is about 17, and some say the Capt Is 50… “

Some 10 years later on 1st May 1759, a young woman’s diary provides another record of dancing. This young woman, Sarah Hurst, was in love with an older soldier with whom she later eloped. Perhaps dancing was a catalyst for their romantic connection. On 12th May 1774 the diary of John Baker captures a dance in Horsham. As Baker goes on to record, May 12th was the old May Day:

“At Cock (an inn in Southwater) a maypole with garlands on it, and several couple of country men and women dancing by roadside before the door” 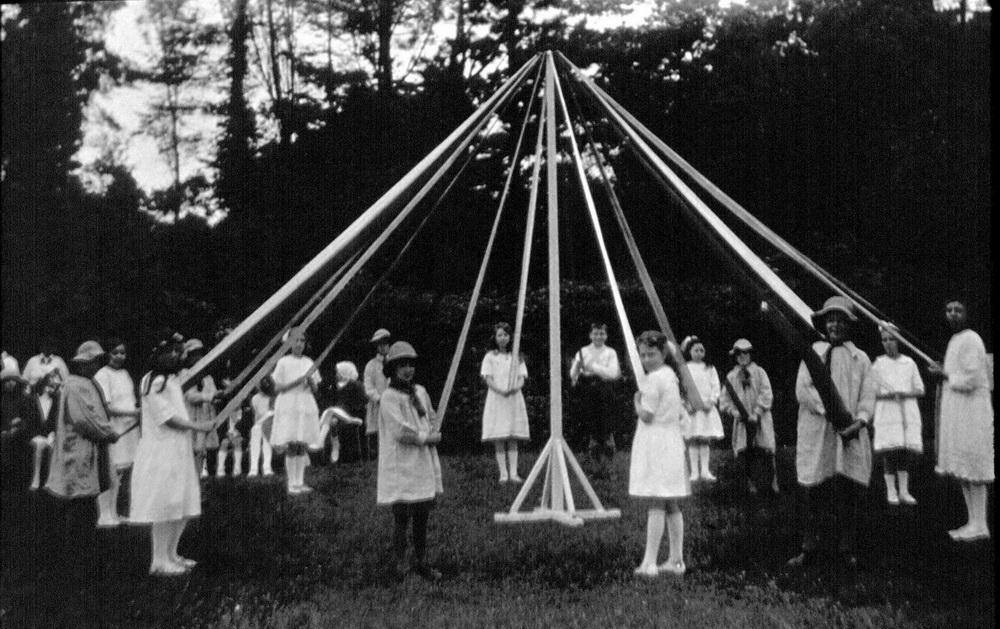 We can see that people took lessons in dancing, but where did they dance and what styles did they dance? Throughout the 18th century English Country Dances seemed to have been popular, with a formal minuet starting the proceedings before the English dances took over.

By the late 18th and early 19th century the waltz became fashionable and English Country Dancing lost its appeal in England, however it did retain popularity in Scotland and America where it transformed itself. Horsham still followed the Country Dances as described in a remarkable description of the Peace Dinner held in Horsham in 1814:

”...kind of Jubilee festival in celebration of the recent peace…in a Ring beneath a temporary Orchestra the gentry were performing Country Dances, in an adjoining field was playing a Female Cricket match . . . more appropriate Celebration of the Peace than the Fetes of His Royal Highness at St James's'. 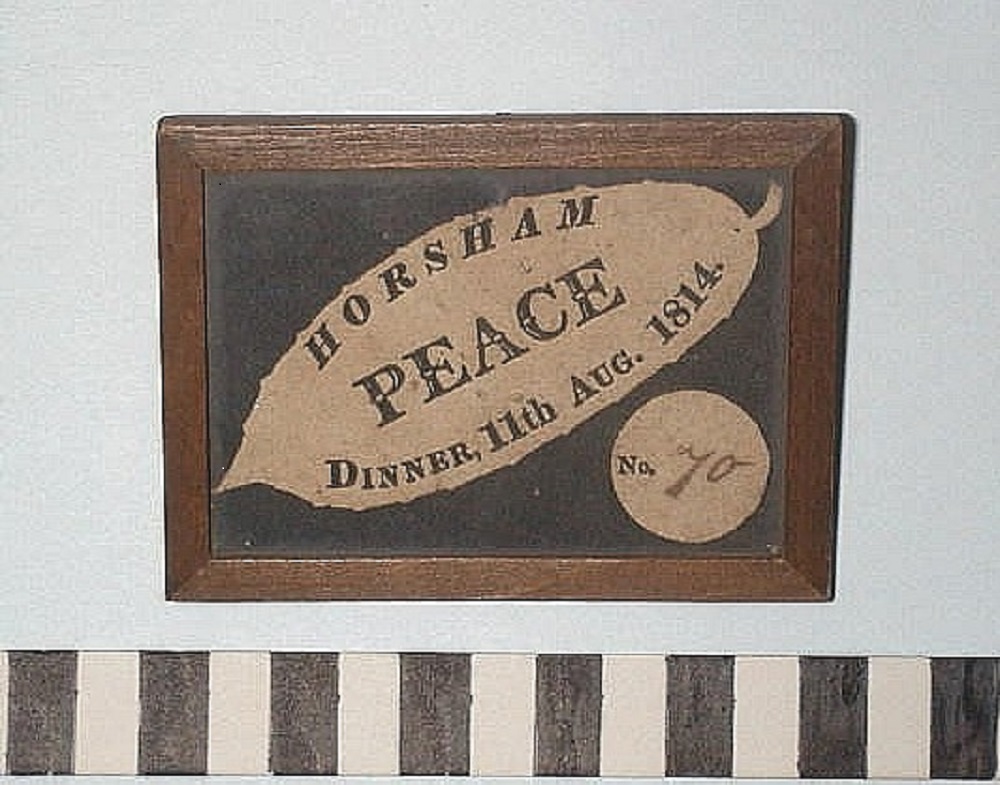 The celebration of the coronation of George IV on 19 July 1821 would undoubtedly have seen dances taking place, though we have no mention of any in Horsham that have survived. We do, however, have a pair of shoes worn at a coronation ball that week and donated to the museum. 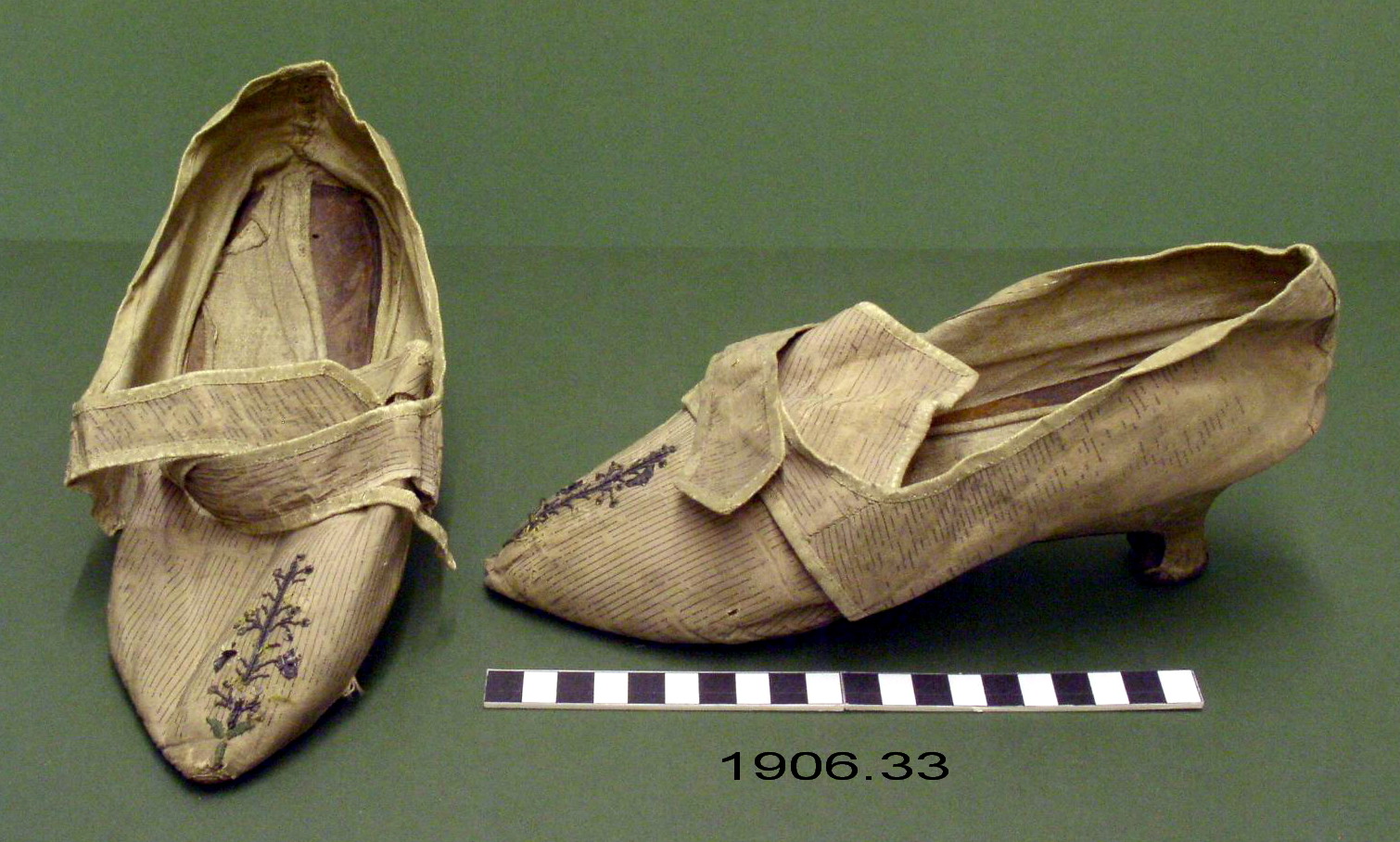 The park became the focus of a major event, when in July 1869 Thomas Honywood was presented with a painting at a 30th anniversary event to mark the forming of Horsham Fire Brigade:

“(At the)… the close of the dinner the Fire Brigade Band was engaged in finding music for those who came for a dance on the greensward, and various other amusements were provided for the public, who attended in large force, the weather fortunately proving fine.”

Some 50 years later, in May 1912, “the Waterwork and Lighting Committee had to regrettably turn down a request for an electrical supply to the owner of The Horse and Groom who wanted to illuminate a dancing green in Denne Road. “

Obviously under today’s restrictions outside dancing would be favorably looked upon. As the range of posters from our collections show, dancing was a very popular activity that was often accompanied by live music.  Horsham had assembly rooms at the Kings Head but there was a shortage of larger halls, so on 22 April 1921 the New Hall opened with a fine dance floor. In 1928 the International Bazaar, run by the Labour Party, was held at the hall and as the press reported “dancing by wireless Orchestra was indulged in late in the evening”.

It was however the opening of the Drill Hall, with the largest wooden sprung dance floor in Sussex, that gave the largest boost to dancing in Horsham. 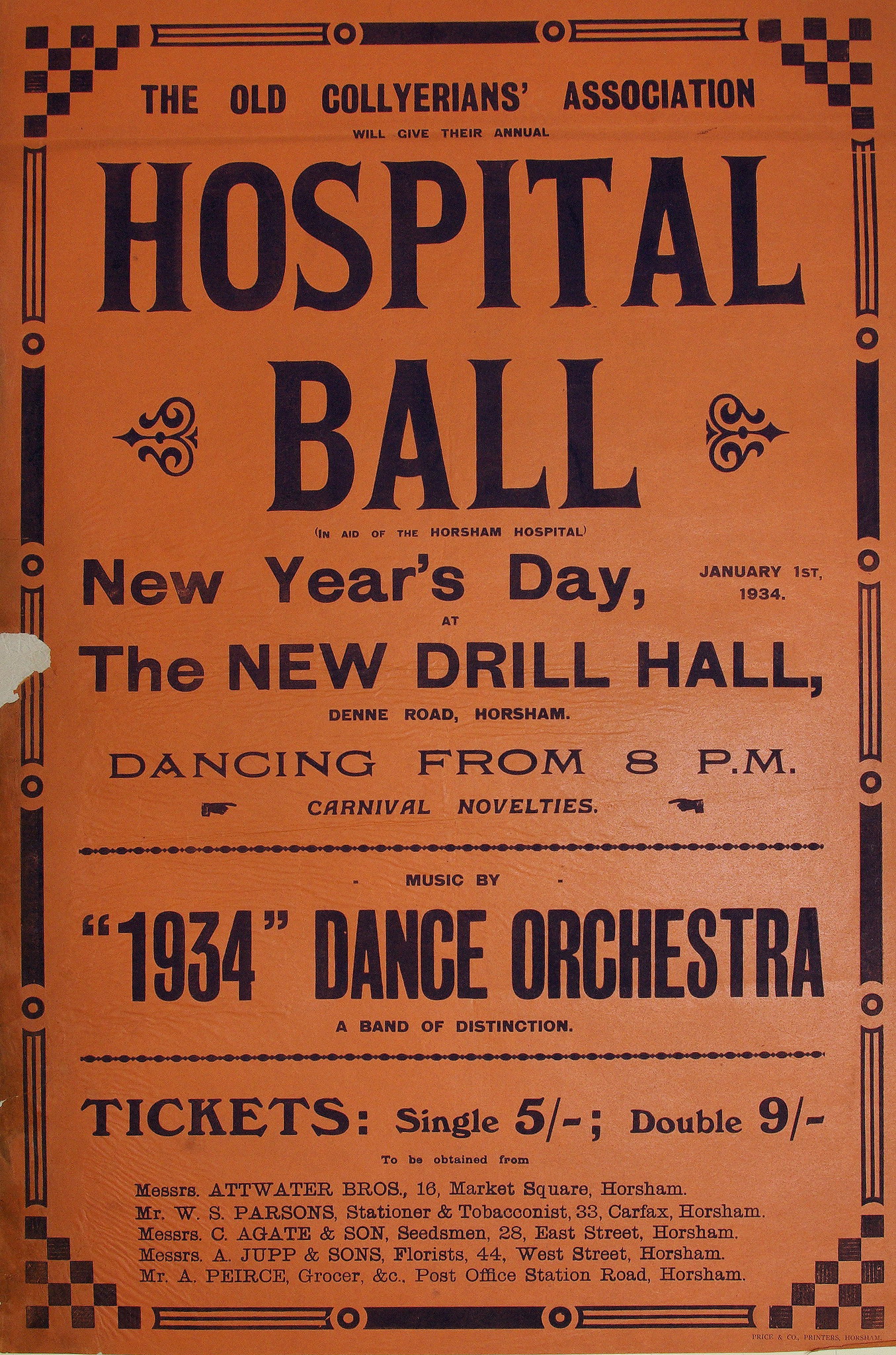 The hall and its superior floor attracted events by large Sussex organisations as well as local clubs and societies. 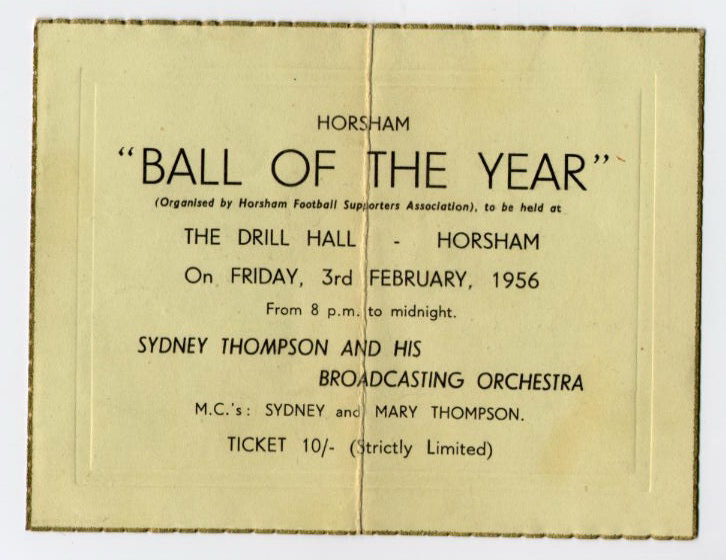 It provided a welcome venue for a growing number of bands and orchestras, as the account from the County Times relates:

‘. . . the Crawley and Horsham Hunt Ball was a remarkable success. There was an attendance of nearly seven hundred and many folk who wished to take part in what is easily the largest social function of the season in this part of the county were unable to obtain tickets.’

The paper gave a list of the ball’s patrons, many of whose names are instantly recognisable from the landowners of the area; Norfolk, Leconfield, Godman, Hornung and many more. The account went on to describe the Drill Hall as follows:

‘The spacious and magnificent ball-room in itself requiring little adornment, was tastefully decorated with large hanging baskets of red carnations and foliage down the centre, whilst the platform represented a grove of palms, enhanced with foliage and white chrysanthemums. Southwick’s band rendered the music.’ 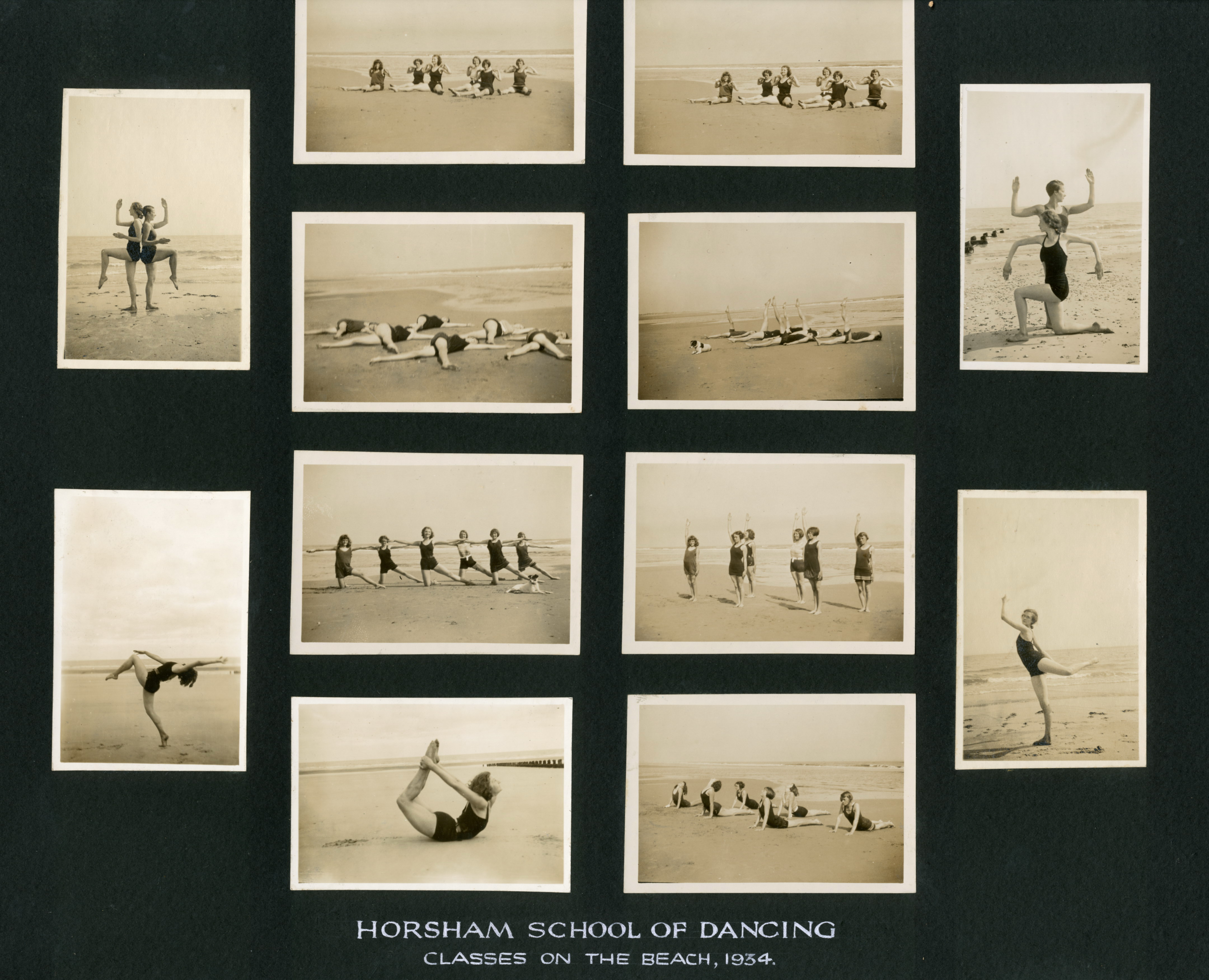