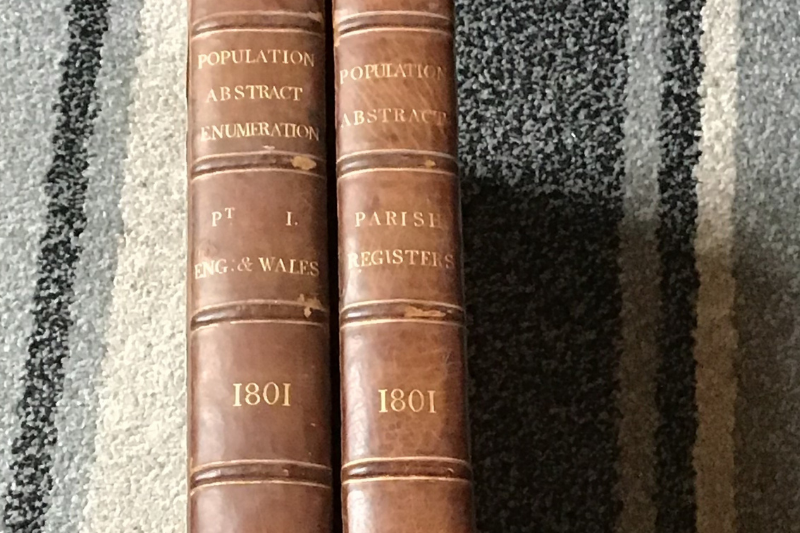 Great Britain conducted its first census 220 years ago this March.  This article looks at that momentous event and its results.

Whilst many people get excited about census returns, waiting to click on the records at 00.01 on the day they are released 100 years after they were recorded, the first census doesn’t have the “granular detail” so beloved of genealogists.

After all, 200 years ago nobody cared which person did what job, what they wanted was numbers. If you could not measure it you could not manage it. It is doubtful that such “management speak” was used in passing the bill through parliament, but in essence that was the reason.

This year we are undertaking the census in the middle of a pandemic. This is not the first census to be done that way, Spanish Flu was raging in 1921. The Census of 1801 was undertaken not in a pandemic but in the middle of a war, unlike the planned 1941 census which was postponed due to the conflict. But why undertake a census at all, and what did it reveal?

There have been various census attempts in the past 2,000 years. The most famous is probably the census mentioned in the Gospel of Luke, that of Emperor Augustus, who demanded the whole world should be taxed, and in order to do that you had to record the number of individuals. In Israel that census led to Jesus being born in a stable, in Britannia a lost record of the people. However, when most people when think of a census they think of the Doomsday book, that great feat of the Anglo-Saxon civil service hijacked by the Norman invaders to find out what they now owned. Though full or errors and not covering the complete country (London and Winchester are missing for example), it is a document beloved of village historians.

To understand the first census in recent times and, the reason for its undertaking, we have to get into the mind set of 18th century thinkers. Observant people can see changes happening in the world around for example, today we see extensive house building going on so assume that the population is growing, but we do not know for certain without counting. In the first half of the 18th century there was an explosion of gin drinking. Londoners were drinking 2 pints of gin a week and the effect was graphically portrayed by Hogarth in his 1751 attack on gin drinking, Gin Lane. The population of London was declining and it wasn’t due to the tide of people moving into the city from the countryside, as again shown by Hogarth in his first plate of A Harlot’s Progress. When people looked at the figures for the number of baptisms and deaths in London, it became alarmingly clear that more people were dying than being born.

That discovery raised concern amongst contemporary commentators and in 1754 an attempt to draft a census passed through the Commons but not through the Lords. From then on people started to assume the population was falling, including the Welsh philosopher, liberal, and friend of Benjamin Franklin and Mary Wollstonecraft, Richard Price. He argued that the population of Britain had fallen from 6 million to 4.5 million in 70 years. In 1798, some 6 years after Price’s death, the seminal book An Essay on the Principle of Population by Thomas Malthus was published.  The book carried the idea that if, and an important if, the population continued to grow unchecked, there would be a permanent underclass of staving population that would lead to famine and death.

So two powerful but competing ideas were circulating. One that the population of Britain was falling, the other that the population of Britain was rising, and both had dangerous consequences. Into this maelstrom of ideas stepped a polymath and radical who would become an establishment figure John Rickman. Rickman was an interesting character, in his youth he had dabbled and networked and as an adult he allowed his children to make daisy chains around his neck but expected them order puddings in Latin at the dinner table. He wrote Thoughts on the Utility and facility of ascertaining the population of England, publishing it in the magazine of which he was editor, The Commercial and Agricultural Magazine. His arguments were practical, laying out in 20 points why there should be a census and how it should be carried out. His arguments included the need to know how many people could fight in a war, as France had an estimated population of 30 million so in sheer numbers could overwhelm the British force. He also pointed out that, “No society can confidently pretend to provide the requisite quantity of food, till they know the number of consumers”

Rickman argued for counting people where they lived, rather than the biblical Roman method of making people go back to the place they were born. He also identified that the ministers of every parish, as civil servants, should undertake the work. The timing was right as 1800 had seen food shortages. A great deal of grain was being used to produce drink rather than foodstuffs, but no one could argue the case without knowing the number of people in the country. Those food shortages and the impact of the war led to William Pitt agreeing to an Act of Parliament. The act was seconded by future MP for Bramber William Wilberforce and passed with ease on 27 December 1800, with the first census taking place in March 1801.

The first census was drawn up by Rickman working alongside the Privy Council. He had just three months to organise it without knowing the size of the task. The forms were sent out by the General Post Office and had to be completed on the same day 1 March, and returned by 10 March. The forms were sent to the Clerks of the Peace and Town Clerks, who then gave them to constables who often passed them to overseers of the poor. All bar one question, number 4, was about the current situation. Number 4 was asked to resolve the question of if the population had grown over the last century, something that had troubled the historians of the 18th century.

By the end of 1801 the results had been tabulated and released, and by in June 1802 the reports were published with a summary by Rickman, with the photos shown here are the relevant  local pages. No one expected another census to be undertaken, but by 1811 the usefulness of knowing the numbers had become apparent.

As for the early returns, the manuscript replies up to and including 1831 were destroyed in 1904, and those for 1881 and 1891 were pulped due to a paper shortage during WWI, and the 1931 census returns were destroyed in a fire in 1942. The returns of 1801 published in 1802 survive in bound volumes printed on hand-made paper, printed by hand by workmen who would have been listed as manufacturing, rather than agriculture in the returns.

The importance of the census cannot be denied but there are arguments about how it should be carried out today as a number of people are often “missing” from the returns. In 1801 a number of countries and parishes did not make a return. In 1790 and 1800 the United States carried out a rough census and gave advice on how they had done it, which fed into our first census. The first season of the American TV drama West Wing dealt with the census, and questioned if it should be an exact count or a statistical modelling exercise based on sampling. It is not something that you would create a drama out of, but it does explain far easier than reading it how census in the future might be done and why.