The Origins and Early Days of Football 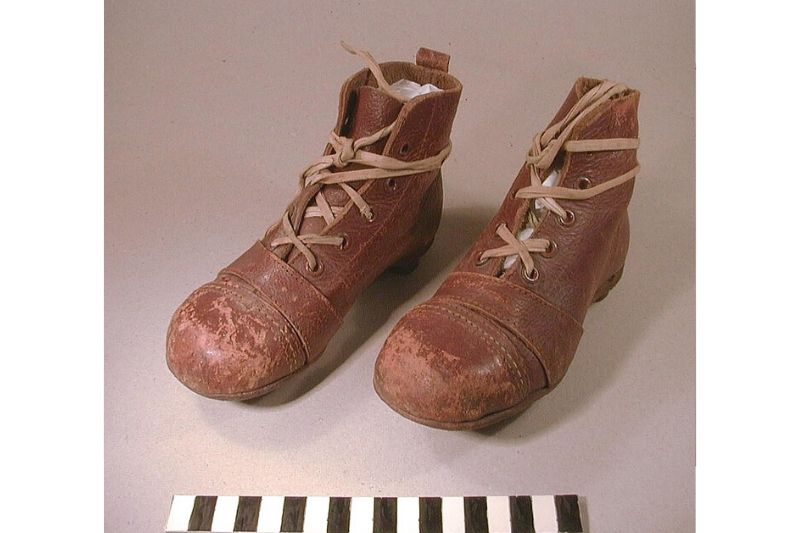 Much to the relief of football fans across the country, the UK’s most popular sport is back on our screens. This blog explores the early days of football in Horsham District.

The Origins and Early Days of Football

Much to the relief of football fans across the country, the UK’s most popular sport is back on our screens. Some loyal fans may have enjoyed the break from fretting about the fortunes of their team, while others may have been missing the dizzying highs and crushing lows of the football season. Whichever camp you are in, one thing is certain, the return of football feels like the beginning of a return to the “new normal”.

Football, soccer, whatever you call it, is popular around the world. The most widely played version of the sport is Association football, which evolved from earlier ball games. A form of football has been played in Great Britain since the Middle Ages, and games that involve kicking a ball have existed for millennia. The Greeks, Romans and Han dynasty Chinese all played ball games that involved kicking, passing between players and scoring points.

The Medieval game was extremely physical. According to 16th century, pamphleteer Philip Stubbs “as concerning football playing I protest unto you that it may rather be called a bloody and murthering practice than a fellowlye sport”. Medieval football had a wide array of variants and few formal rules, with different versions played from one village to the next. Several famous public schools also created their own style of football, including Eton, Harrow and Rugby. These disparate forms of football are the root of the modern games of Association football, Rugby League, Rugby Union, Gaelic Football and Aussie Rules.

After hundreds of years of footballing variation, on 26 October 1863 the captains and secretaries of 12 London and suburban clubs gathered at the Freemason’s Tavern on Queen Street, London finally to lay down a set of formal rules for the increasingly popular sport. That night the Football Association (FA) formed. There were a further five meetings in the next few months that laid down the rules and regulations of Association football. These initial rules allowed for a mix of handling and dribbling the ball, and there were extensive arguments over the legality of “hacking”, i.e. kicking your opponents’ legs to win the ball. The new Association published their final rules, minus hacking, on 8 December 1863. The impact of the FA took some time to be felt, yet eventually, as the standing of the body grew and following the introduction of the Football Association Challenge Cup in 1871, the FA’s rules became the norm.

Gradually local County and District Associations sprang up around the country, often running their own leagues and tournaments. Horsham was no exception, and on 23 February 1871, the West Sussex Gazette reported that Horsham now had its first football club that played in Springfield Park. According to contemporary sources one of the local churches launched this new club, and its rules mostly followed the framework set out by the FA and included several injunctions against dangerous play; “Rule 18, No hacking allowed…Rule 20. No one wearing projecting nails, iron plates, or gutta-percha on the soles or heels of his boots shall be allowed to play”.

How it Started in Horsham

Despite the presence of a Horsham-based football club as early as 1870, it would appear that the people of Horsham had not yet caught the football bug. In the late 19th century, local newspapers rarely reported on football matches, tending instead to focus on the most popular sport at the time, Cricket. The Horsham Journal recounts the local Cricket clubs’ scores in detail, occasionally highlights the new craze of cycling, covers a few athletics meetings, and yet makes no mention at all of football.

The location of Horsham’s football matches may have contributed to the newspaper’s limited interest in the sport. Springfield Park was not in the town centre, and was separate from the athletic and cricket fields. This not only kept the boisterous new sport away from the more genteel parts of town, but also restricted its appeal to spectators and casual watchers. As the popularity of football grew, it gradually began to attract fans and players from outside of its original, middle class base. As industrial workers began to get regular afternoons off work, they had more time to engage in leisure activities such as football, whether playing or watching. The increased working class interest in the sport attracted negative responses from some, and many people raised concerns about the physicality of the sport, and the lack of decorum demonstrated by some players.

During the 1880s, the number of teams with players from all social backgrounds rapidly increased. Larger clubs began to charge admission for matches, thereby allowing themselves to start paying their players. The payment of players was a source of contention for a number of years; in 1884, the FA went as far as expelling two clubs from the league for using professional players. However, by the following year the use of paid players had become so commonplace that the FA had no choice other than to sanction professionalism in football, and a professional football league was founded. Despite charging admission, and forming limited companies to purchase land and infrastructure, clubs would not be particularly profitable for many years. 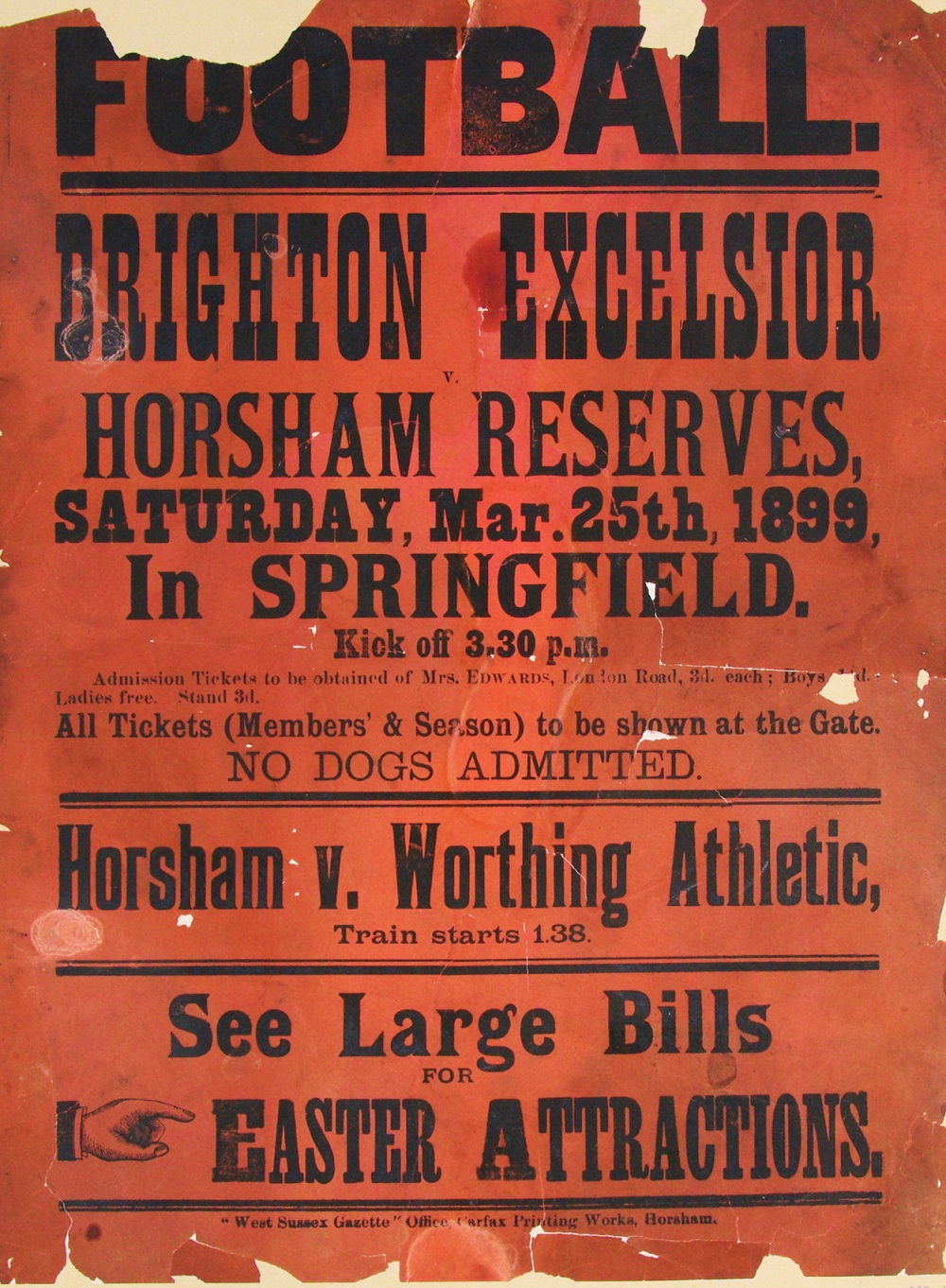 The Horsham and District Football Association was founded in 1895, “for the purpose of providing players for the Horsham FC”. Horsham Museum and Art Gallery holds the original minutes of the Horsham and District Football Association from 1904-13, which reflect the social changes happening in the sport. The minutes reflect a desire to retain the amateur status of the local clubs, despite the increasing professionalisation of football, thereby appealing to the leisurely upper middle class supporter base. The Association also hoped to improve the image of the sport amongst the public encouraging member clubs to raise money for local charities, and to penalise players for unsportsmanlike conduct.

Over the next few years, the Horsham and District Football Association strove to ensure that the players in its teams were amateurs, rather than one of the newly emerging professional footballers. The August 1911 minutes record that the Association agreed, “no player having played in any recognised County Senior Cup or League Competition regularly during the previous season, or more than three times during the present season shall take part in this competition unless sanctioned by the Committee.” 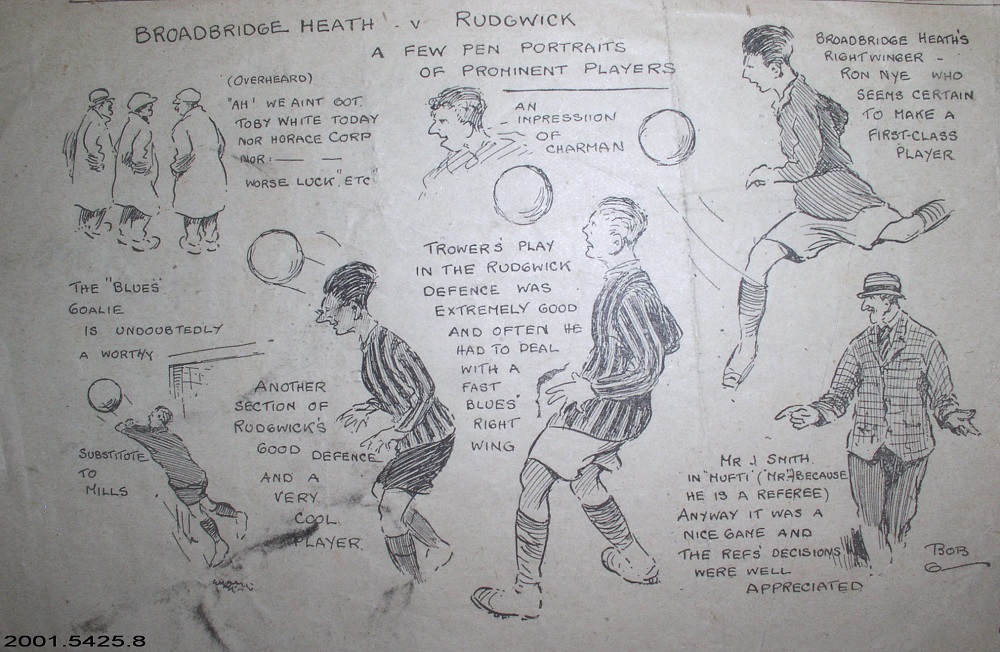 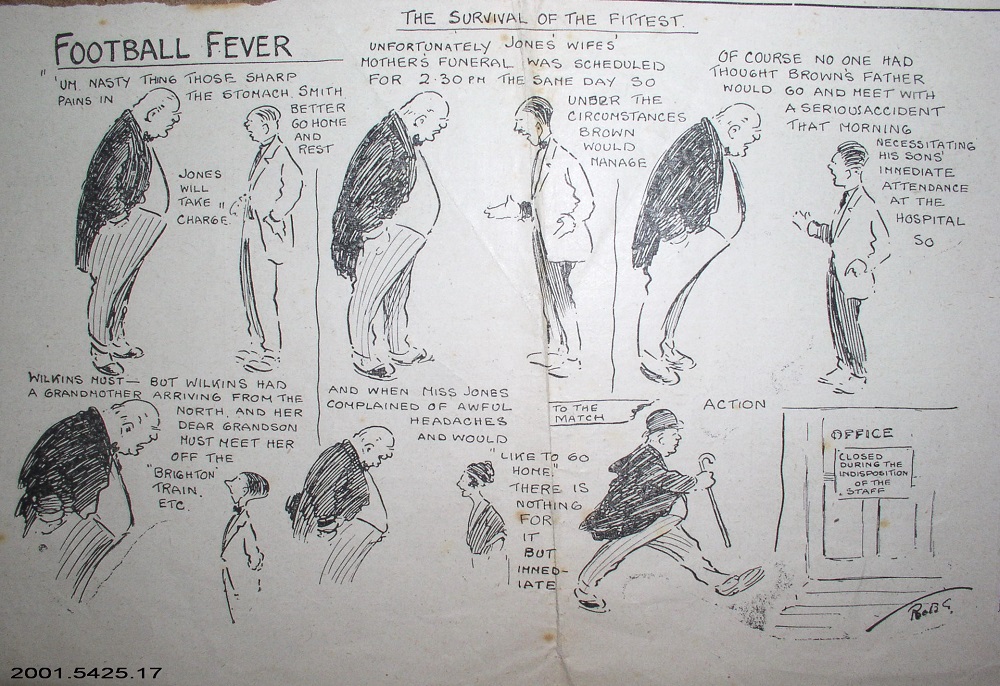 Following the events of the two World Wars, the Horsham and District Football Association was evidently very successful, as by 1939 it had expanded to four divisions. By the 1960s, the League had developed even further, with three divisions, a minor league, four cup competitions, and two minor cup competitions. In 1970, the Horsham and District Football league merged with the West Sussex Football League. Horsham District is now well served with football clubs who cater for all age groups, genders, backgrounds and abilities. They range from workplace teams, through to women’s teams, disability football teams, walking football teams, children’s teams and leagues, through to large clubs with a major following. Each group and club has its own history, complete with its own unique characters, successes and stories. 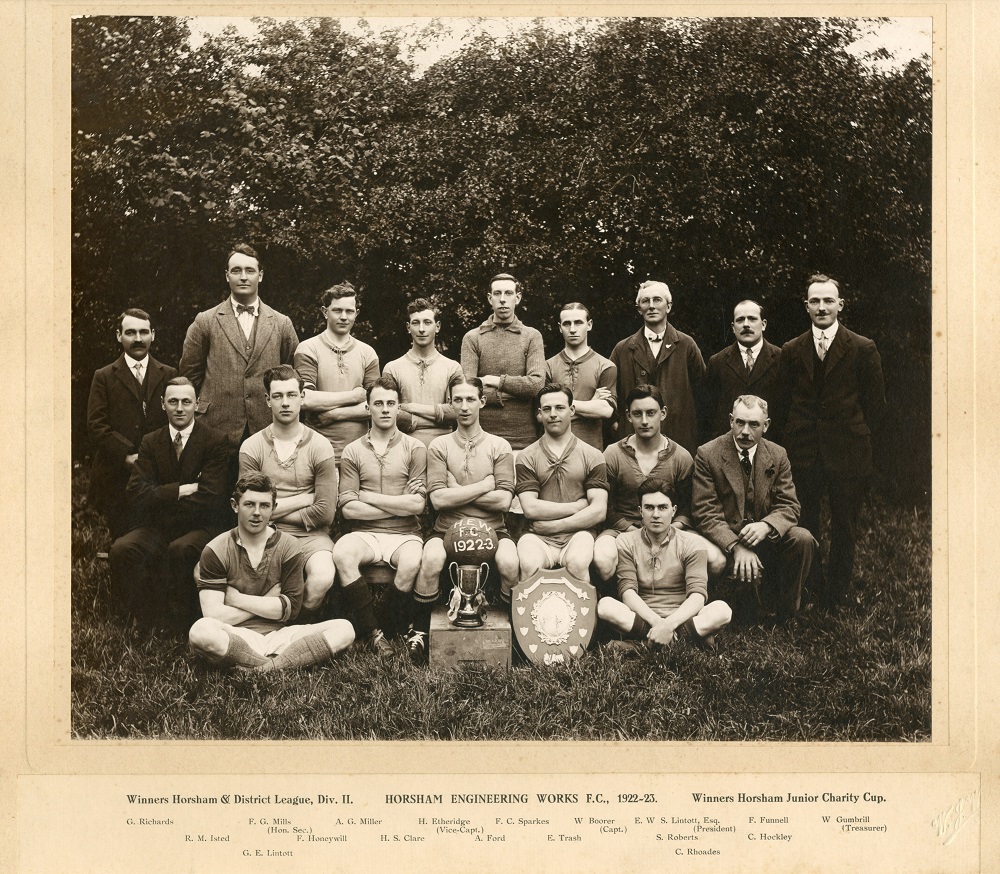 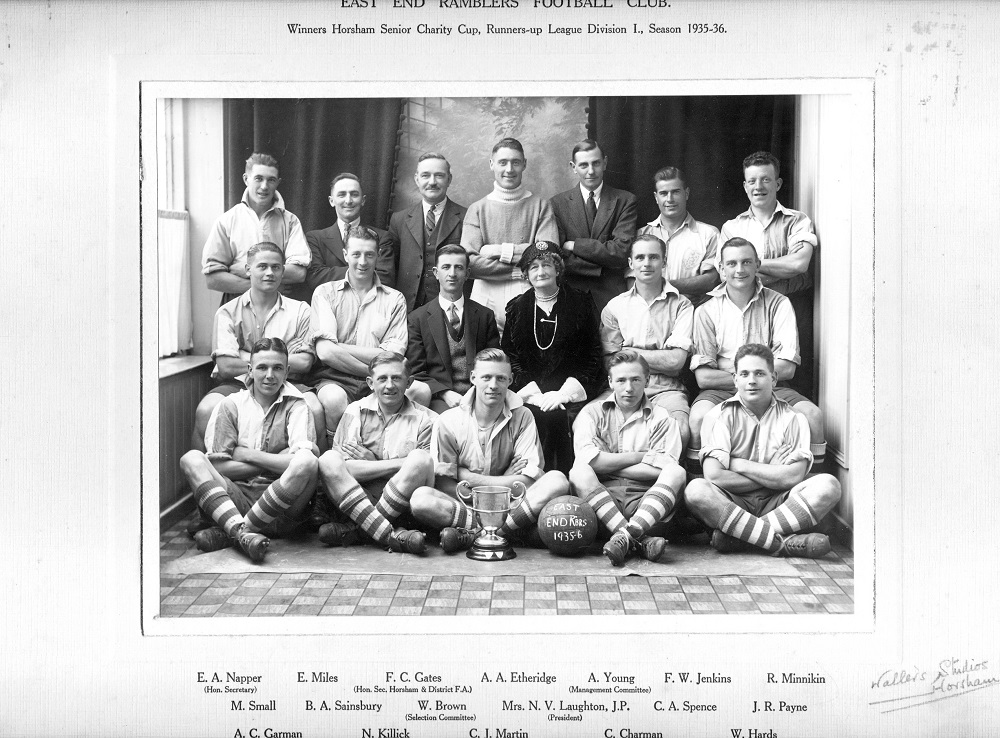